Below is an overview of Tara’s story, as she often told it in her early years as a “guru.” The following details are no longer included on her website’s biography page. Fortunately, the 2003 version can still be viewed for confirmation that we didn’t make this up.

A number of areas of her story most clearly reveal it for what it is:

If you’re not familiar with the Tibetan system of tulku recognition, we recommend getting a basic familiarity before embarking on this story. One starting point might be The Telegraph’s Tibetan Buddhism: what is reincarnation? 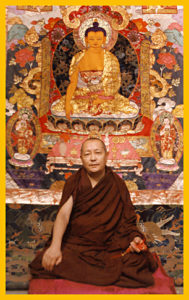 Kyabje Domo Geshe Rinpoche was one of the most well-respected Tibetan Buddhist masters in recent times. Born in Tibet in 1937, he was recognized at an early age and educated in the finest Gelug monasteries. During the Chinese invasion of 1959, he was imprisoned under terrible circumstances for several years, until finally being let out after repeated petitions due to his Sikkimese nationality. He resettled in Northern India and worked with the Dalai Lama to establish important Tibetan cultural centers. In the mid-1970’s he moved again to the Catskill Mountains in New York, where lived out the rest of his days. His beautiful, expansive property was named Gangjong Namgyal. The estate’s estimated worth was $11 million in 2009.1Biographical details from the Official website for Kyabje Domo Geshe Rinpoche, accessed May 20, 2016. 2Property value given in the Isthmus interview with Tara from 2009, accessed June 11, 2016. 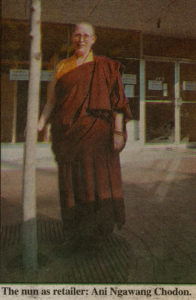 Tara3It can be difficult to know what to call her. Part of the challenge is the number of times she changed her name throughout her life. Thus, critics of her refer to her by different names, as you’ll see as you explore the references throughout this site, most of which are included in the Resources page. Nonetheless, her current legal name is Tara Wangchuk, and that is the name we refer to her by. met Kyabje Domo Geshe Rinpoche shortly after he arrived in the United States. She became his disciple, did retreats at his land, and travelled to India several times to further her studies. In 1993, she received ordination from him as Ani Ngawang Chödon. Local newspaper articles from her time as a nun provide what little we know of her life before she became a “guru.”4Spiritual Journey Takes Buddhist Nun Around the World, Saint Paul Pioneer Press, November 1996. And Unsquishing Jewel Heart, Ann Arbor Observer, December 1999.

Tara’s claim of transference goes something like this. In 2000, she became intuitively aware that Rinpoche had a terminal illness. Feeling it was intolerable that his students would have to wait 20-30 years for him to be reborn, re-educated and able to teach again, she came to him requesting that he bypass a traditional reincarnation, and instead transfer his mind immediately to her. This would enable him to continue teaching with no discontinuity.

Tara says that Rinpoche meditated on it, and determined it would be of benefit to transfer his mind to her. Therefore, in May of 2000, she says he performed a ritual in secret, called transference of consciousness (drong-juk in Tibetan).5The practice of drong-juk is a recorded part of Tibetan Buddhism, being found in the Six Yogas of Naropa. A brief overview of it is available here. More detail on the Gelug perspective on drong-juk is available in Glen Mullin’s excellent book Six Yogas of Naropa. It is worth noting that this text, as with Je Tsongkhapa’s original work that it comments on, only includes a few pages on the practice, since it is considered extremely rare, esoteric and to kept under utmost secrecy.

After this, Tara says her body was occupied by her teacher’s mind in addition to her own. As striking as that claim is, she also said Domo Geshe Rinpoche continued living in his original body in New York – for another year and a half until he passed away. Hence her story involves two sets of incredible dualities – two minds in one body, and one mind in two bodies. Tibetan descriptions of drong-juk mention fringe cases of two minds in one body, though they never mention bilocation!

Tara and her organization have pointed out that Domo Geshe Rinpoche was one of the greatest masters of his time, and if anyone could perform such a feat, certainly he could. This overlooks an important detail, though. We have confirmed that Domo Geshe Rinpoche never told anyone he was planning to do this. Nor did he ever tell anyone that he had done it.6Communication with his attendant of the time, May 2016. Clearly, he did not plan for her to be his next incarnation.

To continue Tara’s story, she said Rinpoche’s English was very poor, despite his having lived in the West for 30 years. A firm grasp of English would be important if this new incarnation was meant to reach a Western audience. Since they supposedly occupied the same body and were always connected, she was able to quickly train him to be a fluent speaker.

Yet this fluency came at a cost. Tara has never been able to speak Tibetan. The significance of this can’t be overstated. Her explanation is that the guru living in her body had to forget Tibetan in order to master English. His native language had to be thrown out the window.

This is one of the biggest nails in the coffin of her credibility, yet another explanation which is, in hindsight, utterly ridiculous. We believed it, as with most other aspects of her story, because at the time we were won over by her charisma, unique teaching style, and the mysticism of all things Tibetan.

By June of 2001, Tara had set up shop at the Mahayana Dharma Center in Spring Green, Wisconsin. This was the first place she chose to offer talks to the public after the “transference”, despite having lived for years in the Twin Cities and Ann Arbor.7Private communication with Tara, early 2002.8We know she lived in these places because of articles which featured her in each of these areas. Spiritual Journey Takes Buddhist Nun Around the World, Saint Paul Pioneer Press, June 1996. And Unsquishing Jewel Heart, Ann Arbor Observer, December 1999. The fact that she severed ties from her past communities, where she had taught and lived for years, is extremely suspicious.

At this point, she frequently told attendees of her talks that she was both Ngawang Chodön and Domo Geshe Rinpoche – though she hadn’t yet announced to the larger world that she was the guru. Was this to avoid having Rinpoche find out and publicly repudiate her claim?9She taught a series in Madison from August to October 2001 at the Shakti bookstore, and billed herself as Lama Ngawang Chodön.

Kyabje Domo Geshe Rinpoche passed away on September 10, 2001. Tara began presenting herself under his name at her next set of lectures, in late October.10Flyers used to advertise for these events attest to this. You can also visit the biography and events pages of her original White Conch website, which appear to have been last updated September/October of 2001, to see her first using his name.

By January of 2002, she had relocated again, this time to California – taking her even further from her past in the Minneapolis, and Domo Geshe Rinpoche’s group in New York.

In August of 2002, she told her disciples that Ngawang Chodön had left, no longer being needed. She was now 100% Domo Geshe Rinpoche.11Conversation with the attendees at her Summer Retreat in Santa Rosa, California. Having received the American’s memories, cultural experiences and knowledge of English, she could go forward and fulfill her destiny as a great Guru for the West.

Read the next chapter in the story – Seeking Recognition