Whatever Ms. Quinn-Dadak does or teaches under her own name is not our concern. However, she may not use the name “Domo Geshe Rinpoche” nor may she continue to pretend to be his true incarnation.

Tara tried countless times to get the seal of approval as Domo Geshe Rinpoche in the years soon after the “transference.” In all the years since 2001, she hasn’t convinced a single person in a position of authority in Tibetan Buddhism to publicly support her claim. Below we retrace the steps she took, the opportunities she was given to prove herself to lamas and friends of Domo Geshe Rinpoche, and the reasons she was rejected.

As background, readers will need to understand what is meant by “recognition.” One gains recognition within Tibetan Buddhism when a lama officially and publicly states that one is the reincarnation of a previous lama. This is sometimes accompanied by a letter for verification. A teacher may only bear the titles of tulku or rinpoche if they have been given by a qualified lama.

The earliest attempt that we know of occurred in the winter of 2002 / 2003. Tara brought a handful of students on a trip to India and Nepal, presenting it as a Buddhist pilgrimage and retreat experience. What was not marketed, however, was that much of the trip would be spent in attempts to gain her recognition.

The first portion of the trip was spent visiting several major Tibetan monasteries which had been re-established in South India. Here she attempted to gain an audience with His Holiness the Dalai Lama. She wrote letters to him. She asked her students to write letters to him. At one point, she even planned to have her monks – who had received novice ordination only months before – attend a full ordination ceremony with him! This was all without success.

After an interlude in Nepal, she next travelled to Darjeeling in northern India, home to Kyabje Domo Geshe Rinpoche’s monasteries. Here she hoped to meet with monastery administrators and former friends of Domo Geshe Rinpoche, to gain their endorsement before they had a chance to name a child as the new reincarnation. 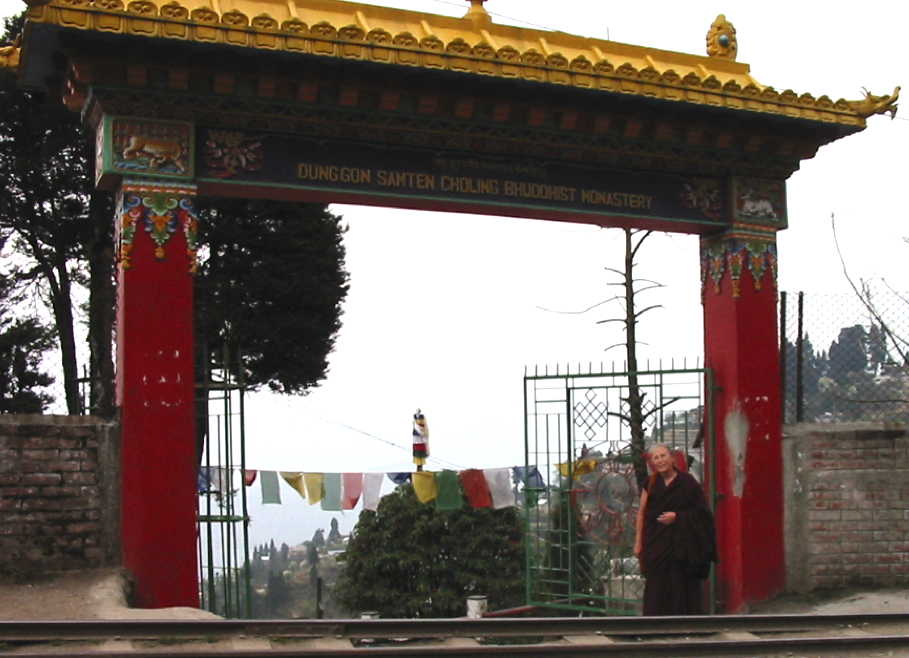 It started with the Samten Chöling monastery. She never stepped foot inside, however she made trips past the monastery gate each day in a rented van. She had the van stop outside the gate, and proceeded to sit silently for several minutes with her hand held up, palm facing the monastery. In retrospect, knowing she believes she possesses psychic powers, it’s very possible she was trying to bend them to her will.

Not finding success there, she set up shop 2 hours away in Kalimpong, home to Domo Geshe Rinpoche’s other monastery in India, Tharpa Chöling. Here she took a different approach. Tara organized an elaborate 28-person procession to make offerings to the heads of the monastery. Naturally, we were part of it. We posted the following to our group’s travel blog at the time:

A few days later we visited Guru’s monastery in Kalimpong, called Tarpa Choling. …all of the students were sent with the purpose of presenting one of the seniormost monks with an awe-inspiring procession of gifts – 19 full trays to be exact. They abounded with incense and holy images, rice and loaves of bread, cookies and other sweets, clothes… Our guide told us that nothing like this had ever been seen before in Kalimpong, and the locals clearly took notice as the 28 person procession wound its way up the hill, through the city to the monastery. The walk was 15 minutes in all. 2From the entry entitled “High Holy Theater” on February 6, 2003.

A few days later, however, they agreed to meet in her hotel room in Kalimpong. Most of her current students are not aware of this, but it’s true. Tara had multiple meetings with people who knew Domo Geshe Rinpoche, people who were in a position to stop the search for a young child and declare her the true reincarnation.

So what came of these meetings?

We were not in either one, but we know the following. The first ended badly. At a certain point, the assembled group simply got up and walked out on Tara. As they filed out through her doorway, we saw her shouting at them in a frenzy. She later explained away the outburst by saying that Domo Geshe Rinpoche had done this too – this special “wrathful” demonstration would help them recognize him in her.

Her next meeting was a one-on-one with Chungze, the monastery’s in-charge and a personal friend of Domo Geshe Rinpoche. The translator later recounted to us the moment when things went south. Chungze asked Tara to name Domo Geshe Rinpoche’s parents. She couldn’t. She had no idea what their names were.

That was the last meeting. After traveling around India a bit more, she eventually concluded the trip.

Back at home, she told her students she had received “inner recognition” during the trip. As far as we remember, this was the first time she mentioned such a thing. Prior to the failure to gain real recognition, she never spoke of it. As in countless other instances, she demonstrated a keen ability to reframe things when they didn’t go her way.

Letter from the Dungkar Gonpa Society

In May of 2003, just after Tara returned to the United States, she received a cease and desist letter from the Dungkar Gonpa Society. This is the North American branch of Domo Geshe Rinpoche’s organization. The letter demanded that she discontinue all public activities under the name of their teacher.

Tara was undeterred. She continued using his name, and continued petitioning the office of the Dalai Lama for a meeting. In late 2004, the Dungkar Gonpa Society sent another formal letter, laying out the reasons they rejected her claim and again demanding that she stop.

This got her attention. She wrote a long stream-of-consciousness response with the subject “must read everybody.” You’re welcome to evaluate her response for yourself. A formal response was later sent by the White Conch board in February of 2005.3Emails sent to White Conch staff, December 17, 2004 and February 9, 2005. This letter rejected Trijang Choktrul Rinpoche as an appropriate person to recognize the next Domo Geshe Rinpoche (despite this being the tradition), and instead requested a meeting with His Holiness the Dalai Lama.

This request went without a response, and again without success. The Dungkar Gonpa Society ultimately took no legal action against her. Perhaps because U.S. law cannot regulate the use of a religious title. To improve their legal situation, Tara’s organization later purchased the trademark for “Domo Geshe Rinpoche.”

In the summer of 2006, after a 4-year search, Trijang Choktrul Rinpoche made his selection for the tulku. It was not Tara. For more information on his choice, who became known as Domo Choktrul Rinpoche, visit his biography page.

In late 2005, prior to Trijang Rinpoche’s announcement, the Dalai Lama announced his own choice of the tulku after only a 3-month search. It was not Tara.4From the About page of his website, accessed June 12, 2016. For more information on the child he chose, visit Sera Jey Drati Domo Ladang.

Yes, there are two separate boys recognized as Domo Geshe’s tulku. The reasons boil down to the Dorje Shugden controvery, and the resulting schism in the Gelug tradition between the Dalai Lama – who banned the practice of Dorje Shugden – and the lamas and monasteries who refused his order.

In our opinion, if there is such a thing as reincarnation, and if there is a “genuine” Domo Geshe tulku, it is likely to be Domo Chuktrul Rinpoche. Trijang Rinpoche’s lineage has historically recognized Domo Geshe tulkus. Further, it seems likely the Dalai Lama’s choice was made simply to ensure that his side had its own Domo Geshe Rinpoche, who would not be associated with Dorje Shugden.

Tara and her supporters occasionally cite the above situation, and the institutional issues with Tibetan Buddhism it reveals, as justification for Tara declaring she is Domo Geshe Rinpoche without any support. We address these issues on the Response to Criticism page.

After these boys were announced, was Tara deterred? Perhaps. Her attempts to gain recognition appeared to fizzle around this time.

A couple of Tara’s students later took up the mantle of getting her recognized, and in 2008 a meeting was arranged with Namkha Rinpoche, a recognized lama from the Nyingma tradition. He believed her for a time – perhaps because he had never met the real Domo Geshe Rinpoche. He stated in private to her students that he believed she was genuine – but made it crystal clear he was not offering her any kind of public, formal recognition. Instead, he did a couple retreats with her, wrote her a long life prayer, and offered to put her in touch with the Dalai Lama so she could receive official recognition from him.

He also made it clear that when he offered teachings and initiations to her group, he expected at least $3,500 per day to be raised for him.

Their year-and-a-half association culminated in another trip to a foreign land, in the hopes of gaining an audience with the Dalai Lama. Namkha Rinpoche’s community in Switzerland was hosting a week-long series of teachings by the Dalai Lama, and Tara was invited to join. Ordained members of her community were requested to come to make her appear more official. One person was even ordained ahead of schedule to help fill out the retinue.

Was this finally the moment when Tara gained recognition?

Once again, the Dalai Lama chose not to legitimize her by meeting with her. Not getting what she wanted, Tara’s relationship with Namkha Rinpoche soon ended.

As far as we know, that was the last major effort in her quest for recognition. Some of her students carried on, meeting with Tibetan lamas, trying still to procure a meeting with the Dalai Lama. To this day, he has not granted this meeting. You can reach out to the Office of His Holiness the Dalai Lama and verify this for yourself.

After seeing this sudden claim of recognition, we reached out to Namkha Rinpoche to ask if anything had changed. His secretary replied with the following message on May 11, 2016:

I’ve just informed Rinpoche about your email. He said that when He met this woman she indeed asked Him to recognize her as a tulku of the 8th Domo Geshe. At that time Rinpoché told her that He didn’t know at all if this was true. He told her that if she was thinking being this tulku she should make retreat like him, practice like him and make preliminary practice like him and then only Rinpoche could maybe know if she really is the reincarnation of the 8th Domo Geshe. After that she disapeared and since today Rinpoche hasn’t heard from her. So, it is not true that Namkha Rinpoche has recognized her as a tulku of the 8th Domo Geshe.

Don’t hesitate to ask any further questions i will transmitt to Rinpoche.
Kindly,
Taré Lhamo
Secretary of Rigdzin Switzerland

If Tara were an authentic teacher, why would she lie about this?

Read the next chapter in the story – Response to Criticism